Price growth slowed slightly following the increase in the countercyclical buffer and the somewhat stricter rules on amortisation and central parameters of self-regulation. However, imbalances and the factors driving them persist.

In its Annual Report 2013, FINMA highlighted the accumulation of risks resulting from the particularly slow amortisation of Swiss mortgages. With the tax incentives still in place, the problem remains: many borrowers are still making too little use of their available funds to pay down their mortgages. This could lead to affordability problems and even defaults, for example if interest rates rise. An adjustment to the self-regulatory regime in July 2014 sought to better address these risks: second tranche mortgages, i.e. the part of the mortgage with a loan-to-value ratio of more than two thirds of the property’s value, now have to be amortised over 15 years rather than 20. Additionally, amortisation must be at least linear: it cannot be left until the end of the 15 years.

Tighter definitions in self-regulation of the mortgage market

Some key definitions in the self-regulatory regime for the mortgage market were also tightened up. The use of interest-bearing loans as down payment by borrowers is now explicitly prohibited. Second incomes can only be factored into the assessment of financial sustainability if they are subject to joint and several liability. The lower of cost or market value of the property is used to calculate the lending ratio, with the most conservative of a number of estimates being applied.

Other countries where mortgage growth is strong have specifically tightened up their regulations, in some cases going even further than Switzerland, where there is still uncertainty over the precise effect of the measures introduced and the influence of other factors such as possible changes to immigration regulations. With this in mind, the Swiss measures therefore aim to curb the further accumulation of risks without having too abrupt an impact on property prices. Adopting a gradual approach, the Federal Council raised the countercyclical buffer in 2014 from 1% to 2% of the risk-weighted assets secured by residential properties in Switzerland. FINMA supported this move.

Slowdown in increase in property prices

The modest slowdown in the increase in property prices that began in 2013 continued in 2014, but averaged out across the country. Property prices are still higher than consumer prices and exceed the growth of the economy as a whole. Nevertheless the trend has been more marked in the regions that in some cases recorded above-average growth rates in previous years. Mortgage growth has so far eased less than price rises, and still averages around 4% a year nationwide.

Drivers of the boom still in place

Only time will tell how sustainable this discernible slowdown in the increase in property prices is. In the past, temporary falls in real estate prices have always been followed a few quarters later by renewed accelerations. Moreover, key drivers of the boom continue to make their presence felt. In particular, the low interest rate environment is likely to remain in place in the eurozone – and therefore probably in Switzerland – for some time to come.

The current easing in growth has not eliminated the historically high price levels shown in the charts on page 49 or the level of mortgage debt reported in the Annual Report 2013. This is especially true of investment properties, which are more susceptible to economic developments and where interest and amortisation have to be paid for out of current rental income. If the vacancy rates in a segment or region rise, for example due to reduced immigration or structural changes, the financial sustainability of the mortgage can be placed in jeopardy.

The slowdown suggests that the measures taken in 2014 are beginning to take hold. Given that risks still remain, FINMA will continue to carry out mortgage stress tests and on-site supervisory reviews of individual banks in 2015 to monitor how self-regulation is being implemented on a case-by-case basis. The results will determine whether further measures are needed. However, it is still too soon to sound the all-clear for Switzerland’s real estate and mortgage market.

FINMA also carried out twice-yearly comprehensive loss potential analyses of the large banking groups to simulate the impact of a stress scenario on capital ratios. These were accompanied in 2014 by the European Central Bank stress tests, which revealed that FINMA’s analysis is based on stricter assumptions and Switzerland’s big banks would have passed the EU test.

At a glance: mortgage and real estate market

Real estate prices slowed in 2014 in the market regions and segments that had seen particularly high growth rates in previous years. This, however, has not been reflected in the mortgage volume. In the past, such slowdowns in price increases have often been short-lived, especially when drivers such as the current low interest rate environment have persisted. The imbalances built up due to historically high prices remain in place. 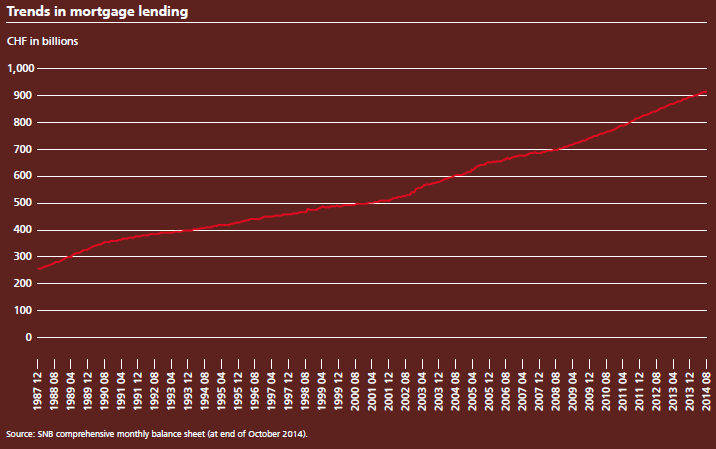 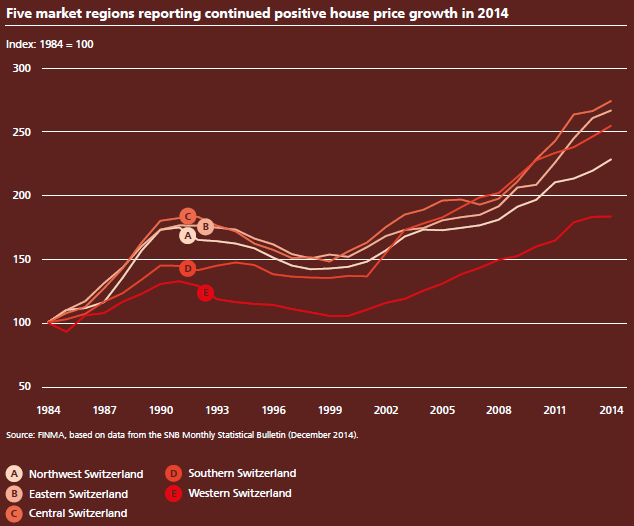 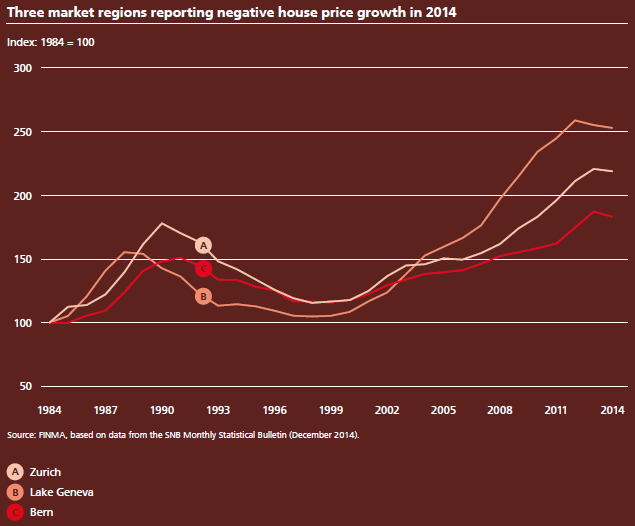