Blockchain was the dominant topic in 2017 and the subject of a FINMA roundtable discussion in May. Two events of regulatory significance were the introduction of a sandbox and the expost review of FINMA Circular 2016/7 “Video and online identification”. FINMA also concluded further cooperation agreements with foreign authorities.

Technology has opened up a whole new dimension for established financial services providers who want to increase cooperation with start-ups.

There was a marked increase in enquiries over the previous year (from 270 to over 453) to the FinTech Desk. Most of the questions were about blockchain, virtual currencies and, in particular, initial coin offerings (ICOs). Data management queries (outsourcing and operational risks) also rose due to issues relating to cloud computing, while enquiries about payment transaction services declined slightly.

FINMA held a roundtable discussion on blockchain in May. Over 100 participants from the financial sector, technology industry and academia attended the event. The main area of discussion was virtual currencies. FINMA shared its initial experiences and exchanged opinions with the experts on upcoming blockchain developments. The dynamic market development in blockchain technology raises some fundamental questions going beyond financial market law and into civil and bankruptcy law.

FINMA has noted major growth in initial coin offerings (ICOs) conducted or offered in Switzerland since mid-2017. ICOs are a digital form of public fundraising. FINMA acknowledges the innovative potential of blockchain technologies, but also points out its inherent risks, especially for investors. Some parts of the ICO procedure may already be covered by supervisory law depending on the structure. In September, FINMA published Guidance 04/2017 containing information for market participants about their potential statutory authorisation requirements. FINMA also initiated investigations of several ICOs to examine possible breaches of supervisory law. In specific instances, FINMA closed down providers of fake cryptocurrencies.

Introduction of the Swiss sandbox

The Federal Council implemented the new sandbox provisions on 1 August. These provisions are designed to facilitate the testing of innovative business models. Companies can now accept funds of up to CHF 1 million without having to hold a licence. They are, however, obliged to inform their clients that they are not under FINMA supervision and that there is no depositor protection for the deposited funds. FINMA has amended its Circular 2008/3 “Public deposits at non-banks” to reflect the new provisions. The changes came into force on 1 January 2018. As announced at the time of issuance, FINMA has also started to revise Circular 2016/7 “Video and online identification”.

INMA represents Swiss FinTech interests when interacting with its international partners. Its participation in international committees seeks to promote Swiss interests by achieving operating conditions favourable to innovative developments and appropriate protection for clients and systems. In addition, FINMA concluded FinTech cooperation agreements with Australia and Israel. These agreements will support Swiss FinTech companies in expanding into foreign markets.

Compared to 2016, most of the enquiries handled by the FinTech Desk in 2017 were about ICOs and cryptocurrencies. Especially in the second half of the year, there was a sharp increase in enquiries about raising capital via ICOs. On the other hand, the number of crowd-based financial models declined considerably compared to the previous year. As many business models are not restricted to a specific type of service, it is not always possible to allocate the enquiries FINMA receives to one of the four categories indicated below. This explains why the values have been rounded. 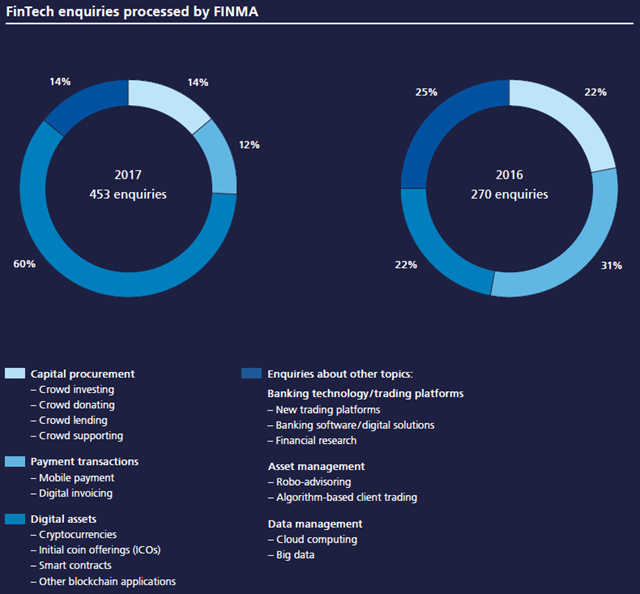