Systemically important banks are required to submit a recovery plan to FINMA once a year. This plan must show what the bank would do to stabilise itself and continue operating in the event of a crisis without government intervention. The recovery plan therefore covers the period of time before a possible resolution by FINMA. The recovery plan must be approved by FINMA.

The objective of systemic stability

Alongside the emergency plan drawn up by the bank, FINMA also prepares a resolution plan for systemically important banks. The emergency plans of the two large international Swiss banks only cover the Swiss legal entities as the source of their systemically important functions in Switzerland. The recovery and resolution plans, on the other hand, are prepared for the entire group.

In the resolution plan FINMA sets out how it would restructure or liquidate a systemically important bank if needed. The focus of resolution planning is on the at least partial continuation of the bank’s business activities. Instead the bank can be fundamentally restructured by selling certain units and divisions or winding them down in an orderly fashion and closing them.

The primary resolution strategy for the large Swiss banks

FINMA’s primary resolution strategy for the large international Swiss banks is to resolve these institutions via the “single point of entry” (SPoE) approach. FINMA intervenes at the level of the uppermost entity in the group, the group holding company, with a bail-in to recapitalise the bank. Both major Swiss banks have such a holding company in their group structure (Credit Suisse Group AG and UBS Group AG). For these large international banks the SPoE approach has the benefit that the home supervisor can carry out a uniform resolution procedure for the entire group. This avoids a situation where different supervisory and resolution authorities compete to resolve different entities within the bank in different jurisdictions at the same time. This would lead to complex and messy jurisdictional disputes.

During a bail-in creditors’ claims are converted into equity, which helps to rebuild the bank’s capital base. A bail-in can only succeed if sufficient bail-inable claims exist to boost the bank’s capital back to the required level. For this reason, systemically important banks must hold gone concern capital. The gone concern capital instruments are held as liabilities on the balance sheet and usually consist of a specific type of debt instrument known as bail-in bonds.

If a crisis leads to losses at subsidiaries, including foreign subsidiaries, the SPoE approach ensures that these losses can be made good. The banking group then recapitalises itself through internal mechanisms. The group holding company lends on the funds raised by the issue of bail-in bonds to its operating subsidiaries. If one of the subsidiaries suffers excessive losses, the holding company waives the repayment of the internal loans (debt forgiveness).

A bail-in at a large bank is likely to be followed by a thorough restructuring as set out in a restructuring plan approved by FINMA. While the bail-in recapitalises the bank and restores compliance with the regulatory requirements, the aim of the restructuring is to enable the bank to return to a viable business model. 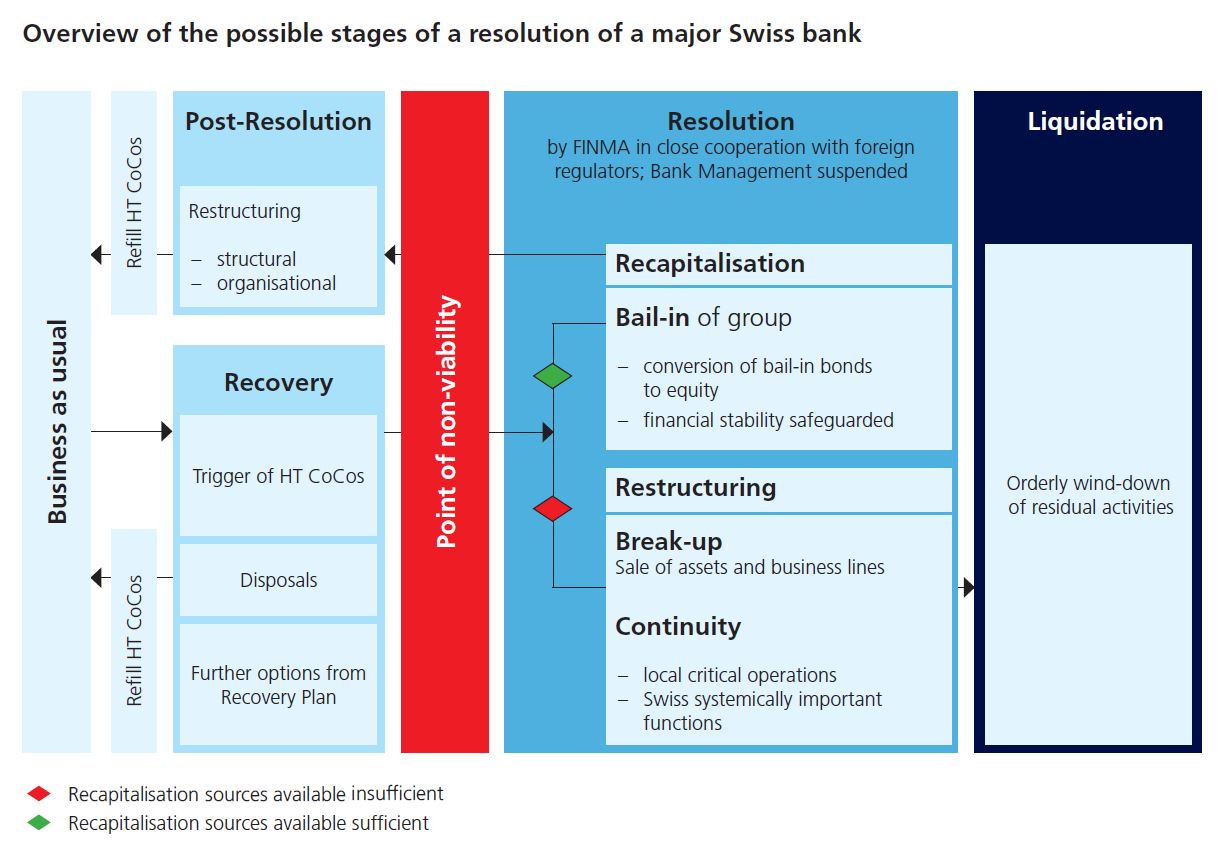 Recapitalisation and continuation of business activities are the common aims of the resolution strategy for ZKB, Raiffeisen and PostFinance, even if the banks differ significantly from one another, particularly in their legal form: ZKB is publicly owned by the canton of Zurich, the Raiffeisen Group is a cooperative and PostFinance is a public limited company (Aktiengesellschaft) indirectly owned by the federal government. These differences are reflected in the resolution strategies for each of these banks.

The banks are required to hold adequate gone concern funds to enable recapitalisation. Unlike the two large international banks, the domestic SIBs plan to meet this requirement in part by reserving CET1 or AT1 capital to be used in the event of a crisis (see “Capital requirements for systemically important banks”).