“Too big to fail” – the long road to the orderly resolvability

Following the financial crisis of 2007 to 2008 legislators around the world brought in rules to ensure that systemically important banks could in future be restructured or wound down in an orderly fashion without resorting to state support (“too big to fail”). The large international Swiss banks, together with the supervisory authorities in Switzerland and abroad, have made great strides in ensuring they could meet this aim in the event of another crisis. Much has been achieved, but there is still more work to do. The FSB, which has been a pioneer on the issue of resolution, has provided the main impetus for the Swiss banks in addressing these challenges. This impetus resulted in amendments being made to ordinances and laws in Switzerland.

The main elements needed to ensure the resolvability of a global systemically important bank, such as the two large Swiss banks, are as follows: adequate capital buffers to absorb losses (going concern capital), a viable resolution strategy with realisable recovery and resolution plans, adequate capital to recapitalise the bank (gone concern capital), adequate liquidity buffers (“funding in resolution”, including for the restructuring phase) and a structure of the group or entity that facilitates resolution and maintains the continuity of systemically important functions. To ensure that the authorities have the up-todate information they need in the event of a crisis, reliable processes and systems are needed to collect data on capital and liquidity at both group and local level and to value assets and liabilities. Systemically important banks must also have plans in place to ensure that the services required to operate their main functions are available without interruption. This includes maintaining access to key financial-market infrastructures.

Strengthening the structure of the two large banks

While the main focus immediately after the 2008 crisis was on introducing what was a novel statutory framework for Switzerland, since 2015 the emphasis has increasingly shifted to implementing the rules in practice. The two Swiss G-SIBs have achieved meaningful progress since the financial crisis. Both banks have significantly bolstered their capital reserves and fundamentally reorganised their structure in Switzerland and abroad with a view to facilitating resolvability. One of the large banks set up a non-operating group holding company to separate funding and operating liabilities. Both large banks have established Swiss bank subsidiaries to house their systemically important functions and have also set up separate service companies. At the same time some of their US activities have been placed in subholdings.

The FSB has set a target date of 2019 for the implementation of most measures. As a result of this, the non-Swiss G-SIBs have certainly not been idle as far as recovery and resolution planning is concerned. Many have achieved significant progress in improving resolvability. Because the USA requires the (partial) disclosure of resolution planning, it is known that the Federal Reserve Board and the Federal Deposit Insurance Corporation (FDIC) have found no further serious shortcomings in the resolution planning of the eight G-SIBs in the USA. The US authorities therefore judged the resolution planning to be credible. However, a number of correctable shortcomings were identified, particularly in the areas of capital and liquidity, and are to be addressed. A peer comparison of progress with other G-SIBs is only possible to a limited extent, since no other country requires the disclosure of resolution planning or a public assessment of the progress made in achieving resolvability. Some comparative information can be gleaned, however, from the assessments of the members of the Swiss G-SIBs crisis management group in the annual resolvability assessment process (RAP). The RAP measures progress in implementing the FSB recommendations. Both major Swiss banks perform well in the RAP relative to their peers, most notably those from the USA and UK. In particular, they are among the first banks that are already fully compliant with the FSB total loss-absorbing capacity (TLAC) standards, which enter into force on 1 January 2022. These are critical to implementing the bail-in strategy that applies to G-SIBs. 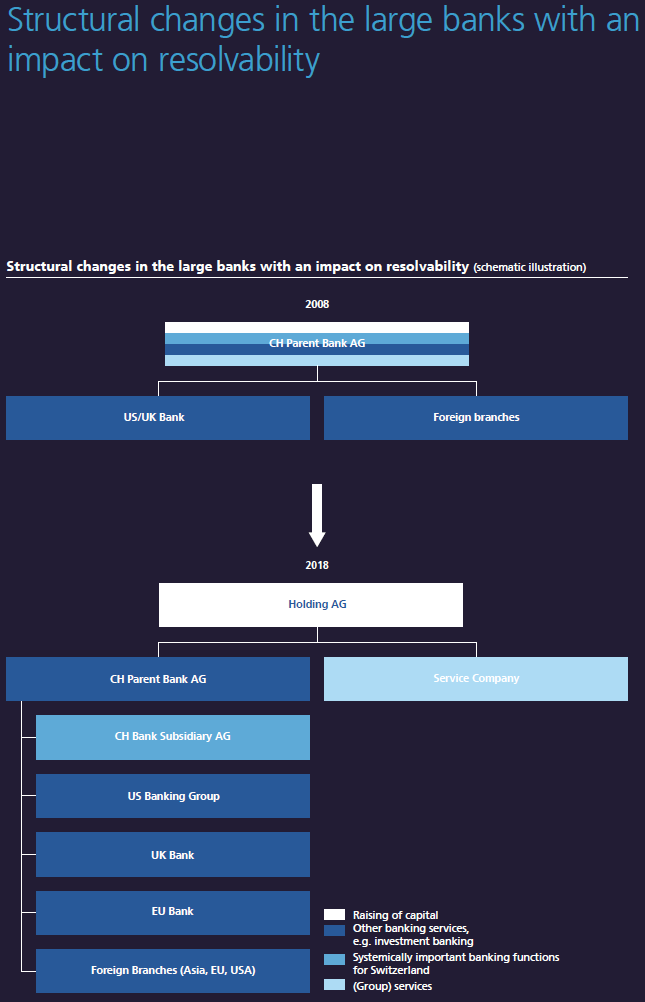